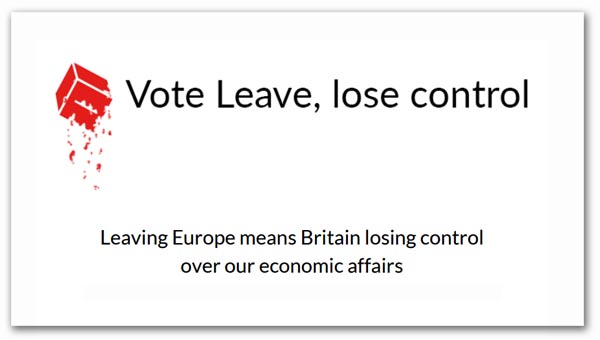 The current Prime Minister once made a purile joke about why he was not on Twitter and, against type, it contains a grain of truth. Asked by Absolute Radio host Christian O’Connell about his views on Twitter, Mr Cameron said: “The trouble with Twitter is that too many tweets might make a twat.” Being a hopeless fashion victim, the PM now has an official Twitter account, which carries the Cameron brand, and is, unsurprisingly, very active.

Another active Twitter user is Vote Leave, Take Control campaign manager, Dominic Cummings, who worked for the Tory Party for many years and laterly for the coalition government, advising one of the Prime Minister’s closest confidants, Michael Gove, at the Department for Education, before a noisy public spat during which it was made clear that the Tory Party leader and this now former Tory Party worker do not see eye to eye. Odd then that given the opportunity to put a dent in the Prime Minister’s reputation—for lying about the “Norway Option”—Cummings, now campaign manager for Vote Leave, ducked the fight and decided instead to support the Prime Minister in attacking those who propose that Britain accept the Norway Option as an interim solution to assure referendum voters that decoupling Britain from the EU’s political structures will not have a detrimental impact on jobs or investment.

The man described as a “mad genius” by tame Tory commentator James Kirkup does not put great stock in assuaging the concerns of the undecideds. On the contrary, Mr Cummings affects to believe that leaving the EU can be achieved without presenting a credible EU exit plan. To be clear, a credible EU exit plan is rather more than a tawdry list of (contradictory) aspirations.

The absense of a Brexit plan amongst the Vote Leave, Take Control crowd has so far resulted in a message so incoherent that anybody fool enough to support the Vote Leave grouping could be forgiven for not knowing whether they are Cummings or Goings. The Man Without A Plan led on (incorrect) figures about the cost of EU membership to the British tax payer with an accompanying website that gives new meaning to the term unreadable. Then, the day before this masterful political campaigner declared that “arguments concerning regulation are more complex than the media suggests” and that many EU regulations “actually come from global bodies”—as Morpheus may say, “welcome to the real world”—the leader of Vote Leave affiliate, Conservatives for Britain, Lord Lawson, appeared on the BBC to regurgitate the same old Tory talking points about “cutting red tape” that have been fouling the EU debate for going on 30 years. Lastly, earlier on the day that Owen Paterson was hung out to dry on Newsnight, Douglas Carswell, like Dominic Cummings, another former Tory, appeared on the BBC News channel where he said that Norway has “a terrible deal with the EU, almost as bad as the relationship that we have with the EU” only to, seconds later, praise the ability of Icelanders to make their own trade deals with China. Does this vastly overrated “intellect” really not know that Iceland has the same relationship as Norway with the EU?

Dominic Cummings may be many things, but stupid? I think not. So why then is he running a campaign that is making every strategic and tactical error in the book? Some experienced Brexit campaigners hypothesise that this may be because the aim is to run a “leave” campaign that ‘steers’ the referendum debate into areas that are ‘safe’ for the Tory Party—and if that means not even attempting to make the case for Brexit then so be it. I do not know, all I have are theories, which, without more evidence, are not worth a great deal. The important point is not what motivates Mr Cummings and his associates to do stupid things, it is the fact that they keep on willfully repeating the same mistakes without regard for how their messages will be perceived more broadly.

To that end, Jonathan Lindsell writes a fair-minded and studied piece for The Huffington Post—a site that I would never normally frequent—in which he ponders the efficacy of the peculiar decision taken by Vote Leave and Leave.EU to support the Prime Minister, who will undoubtedly lead the “remains” come the referendum—in word and deed, if not in name—in his misleading attacks on the Norway Option. As White Wednesday points out, even if the interim Norway Option is not your preferred method for achieving Britain’s EU exit, any Leaver worth their salt is obliged to call out the BSE, Cameron and other assorted europhiles when they lie.

For what it is worth, I think that Cummings, Elliott, Lawson and Carswell may very well be ignorant when it comes to the EU issue, but none of them are stupid when it comes to looking out for number one. The Toryboys understand enough to know that a credible EU exit plan and the campaign that will be required to actually leave the EU, when the leader of the “remains” will be Prime Minister, David Cameron, represents a threat to their power and prestige. This is why no politician can be trusted to lead the “leave” campaign. Not one of them can credibly claim that he or she will not pull their punches at the crucial time.

The Brexit campaign is shaping up to be the people versus the politicians and in a contest like that there can be only one winner, and it is not the politicians.