If we want to get a handle on the immigration situation, the UK government will need to work to foster conditions that promote economic prosperity and political stability around the world. Poverty and war are two of the primary drivers of migration across Africa, Latin America, Asia and the Middle East. This is a global problem which requires global solutions.

As an EU Member State, many of the policy tools that would be at the disposal of the UK government are presently wielded by EU institutions. Trade policy is an exclusive EU competency and a large proportion of British aid—second only to the United States in terms of absolute expenditure—is administered at an EU level.

What happens with that money from there is less than clear, although, by way of an example, one of the recipients of EU aid money is an organisation called BBC Media Action, which, in 2013, received nearly seven million euros from the Directorate-General for Development and Cooperation for EuropeAid in order to promote media activity across the Middle East and North Africa.

Whether that is an appropriate use of tax-payer resources is difficult to determine without going into detail, but, certainly, the decision was not one that was made with any serious democratic oversight.

By contrast, the other day, I happened upon this tweet from the body in charge of supervising the EEA and Norway Grants—Iceland, Liechtenstein and Norway’s contribution to “reducing disparities and strengthening cooperation in Europe”. This is an important activity in which the UK would undoubteldy be involved post-exit. Outside of the EU, however, there would be a greater degree of transparency and accountability with respect to where that money gets spent.

Indeed, the idea of an accountable aid system could be applied in Whitehall as well. As the only country with a legal commitment to spend 0.7 percent of GDP on foreign aid, the UK government should be taking how and where we spend that money much more seriously. The policies that we promote through our aid programme are important in terms of acting in the common good and advancing British interests by means of soft power.

Mobile Money and the Department for International Development

The International Telecommunications Union (ITU) estimates that the mobile-cellular penetration rate stands at 96 percent globally; 128 percent in developed countries; and 89 percent in developing countries. The liberalisation of basic telecommunications services, following a World Trade Organisation (WTO) agreement, which came into force on 1st January 1998, has enabled mobile markets that are more open and better regulated than their fixed-line equivalents to flourish. Whereas land-line services are still mainly provided by formerly state-owned incumbents—especially in the developing world—the mobile space is characterised by its diversity. Competition between network operators, equipment suppliers and high-street retailers has resulted in lower prices and better quality of service for millions of telecommunications customers.

The unprecedented speed of cell-phone adoption in the developing world has transformed the mobile phone from a simple communications tool to a service delivery platform, enabling millions of African, Asian and Latin American consumers to ‘leap-frog’ fixed-line telecommunications in favour of cheaper and more adaptable cellular alternatives. In 1999, only 10 percent of people living in Africa had access to mobile phone coverage, today that figure is in excess of 80 percent, with more than 10 times as many mobile phones as landlines in sub-Saharan Africa.

To that end, one of the most successful foreign aid initiatives funded by the UK government over recent years was the M-Pesa mobile money service—developed by Vodafone subsidiary, Safaricom, in co-operation with the Department for International Development. Mobile money provides a means for people who do not have access to traditional bank accounts to transfer and store cash. Approximately 25 percent of Kenya’s gross domestic product (GDP) now flows through M-Pesa, which is used by over 17 million people—more than two-thirds of Kenya’s adult population.

Initially marketed as a way to send and receive remittance payments, mobile money is now being thought about much more broadly. There are currently 228 live deployments of mobile money services in 85 countries, as well as 115 planned deployments, mostly in developing countries.

With a View to the Future

I offer this as only one example of a worthwhile initiative, alongside the recognition that far too much foreign aid money is wasted on frivolous, pointless and sometimes harmful and regressive projects—the EU policy of not supporting coal-powered power projects in the developing world, where the demand for electricity still far outstrips supply, is both harmful and regressive.

An integrated trade and aid policy under democratic control of the British people could become a tool for removing technical barriers to trade, through support of the rules-based multilateral institutions empowered by the WTO Agreement on Technical Barriers to Trade, and by removing physical barriers to trade by investing in and supporting the building of modern roads and ports, while also providing training to authorities to improve surveillance and enforcement systems. Rather than providing a means for politicians and others to burnish their own virtue at tax payer expense, an independent trade and aid policy would become a tool to advance British policy aims, such as opening new markets for exports (including our world-class service expertise) and reducing the “push factors” that drive much immigration while also benefiting the internal and intra-market trade between developing economies.

Providing expertise and assistance to help emerging economies grow their human capital is the only long-term approach that will address the migrant crisis which EU institutions and the UK government (as part of the EU) have allowed to fester. If we want to solve global problems we have to start thinking globally and I would suggest that abandoning EU parochialism, which prioritises political integration regardless of the costs, and taking responsibility for governing our own affairs, holding elected officials within our own administration to account is the first practical and pragmatic step towards a political settlement that is better for everybody. 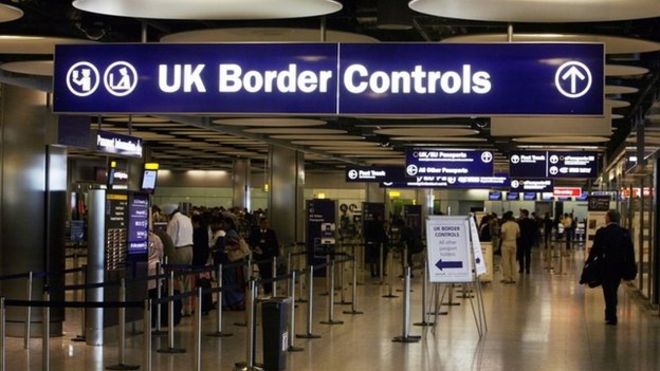 The current Conservative government led by Prime Minister, David Cameron, campaigned and was elected on a manifesto pledge to reduce net migration from the hundreds of thousands to the tens of thousands per annum. The chance of any UK government fulfilling that or any similar policy aim while Britain remains a member of the European Union is close to zero.

This is not only because of EU freedom of movement. Arguably of even greater importance are the shackles that supranational EU policy-making imposes upon disciplines and departments as diverse as trade, aid, foreign affairs and defence.

Polling data shows that most of the electorate would like inward migration reduced. The next question for any responsible government must surely be, “How can we achieve that policy aim while also balancing other concerns, such as maintaining a stable economy?” The answer, as with any major change, is one step at a time.

First of all, it is important to note that immigration and asylum are separate areas of policy. The two are too often conflated and confused, especially by the legacy media, which makes promoting alternative policy choices harder than it should be.

Upon leaving the EU, the UK would almost certainly agree transitional arrangements with the remaining EU Member States. That would most likely mean repatriating the entire EU acquis—body of EU law—and stepping out of the EU’s political and judicial arrangements into an EEA type of relationship.

That may involve rejoining EFTA or it may not. Either way, such a deal would protect jobs and investment at the point of exit.

The EEA agreement is Single Market membership—on the same terms as Norway, Iceland and Lichtenstein—without the Common External Tariff or the Common Commercial Policy, which binds EU Member States to the EU’s “common position” in international trade talks and on global standards-setting bodies.

Free of those encumbrances, the UK would be able to deal direct with partner countries at the world level, sitting eye-to-eye with the EU, the USA and the other big players in the WTO, Codex, UNECE, the IMO, etc.

The EEA agreement has a unilateral “emergency brake”—Article 112 and Article 113—akin to the one that Cameron tried but failed to negotiate. Leaving the EU would also put pressure on our massively dishonest government to address the “pull factors” which incentivise immigration, such as councils not properly enforcing occupancy rules. Reducing inward migration is in no small part a matter of political will and a vote to leave the EU would send a clear signal.

Leaving the EU would also give the UK the opportunity to play an active role in helping to address the “push factors” that are the real root of the problem. The developing world needs both prosperity and peace. An independent UK with an integrated trade, aid, foreign and defence policy, committed to reducing immigration, could work to bring stability and wealth to other parts of the world, repudiating predatory and self-defeating EU trade practices, such as signing one-sided deals with emerging economies. Unrestricted free trade for underdeveloped countries is simply not appropriate. Emerging industries need protection before they are fit to bear the brunt of competition from developed and highly efficient European industries.

The EU also has a tendency to add unnecessary and unwelcome political clauses to trade agreements. What do you suppose is more important for growing Africa’s wealth and prosperity, gay marriage and green energy targets or affordable energy and gainful employment?

An independent UK could work to find solutions to these global problems, rather than being but one voice among the EU-28.

The exact form Britain’s post-exit immigration and asylum policies would take would be a matter for national democratic debate, as would trade and, to a much larger extent than they are at the moment—given the greater policy agility and autonomy the UK would gain outside the EU—aid, foreign affairs and defence.

Those conversations will not happen unless Britain first leaves the European Union.

There would be trade-offs whatever policy is adopted, but outside of the EU those decisions would be taken by people who are accountable to the British electorate. That is the key reason Britain should leave the EU.